FDA Clears A Duodenoscope with a Detachable Cap Almost 20 years ago, the FDA cleared two other duodenoscope models with a reusable distal cover for sale in the U.S.

Sept. 25, 2017 (Monday; 11:47am) — The FDA announced last week that it has “cleared the first duodenoscope with a disposable distal cap” for use in U.S. hospitals, calling this a “new feature.”

According to the FDA’s press release issued last Wednesday, the Agency “believe(s) the new disposable distal cap represents a major step towards lowering the risk of future infections associated with these devices.”

The FDA added in this statement that this detachable cap, located at the tip of the duodenoscope’s insertion tube, “will improve access for cleaning and reprocessing.”

Pentax Medical (Montvale, NJ) will market this new duodenoscope, called the ED34-i10T.  Images and the specifications of this device are pictured in a product brochure (released by Pentax Medical in Canada).

“This new scope will probably reduce the infection risk, but I’m not sure by how much.” — Lawrence Muscarella, PhD a hospital-safety consultant in Montgomeryville, Pa, told KHN.

This clearance is attracting the interest of the public and infection control community.

Last Friday Kaiser Health News (California) posted the article “To Wage War On Superbugs, FDA Clears Way For Scope With A Disposable Piece,” which provides more details about the FDA’s clearance of this new device.

“The Pentax ED34-i10T model duodenoscope is intended to provide visualization and access to the upper gastrointestinal (GI) tract to treat bile duct disorders and other upper GI problems,” the FDA wrote last week in its press release.

This clearance is not the first of its kind, however, last week’s FDA press release notwithstanding.

While the ED34-i10T may be the first duodenoscope cleared in the U.S. with a single-use cap, almost 20 years ago the FDA cleared two duodenoscope models designed by Olympus (Center Valley, PA) — the TJF-140R and JF-140R — that featured a removable distal cover, also located at the end of the endoscope’s insertion tube.

Olympus has published detailed instructions for the attachment and removal of these covers, called the MAJ-311 and MAJ-411. The manufacturer instructs users to “clean and disinfect or sterilize the distal cover” as described in the duodenoscope’s reprocessing manual.

Olympus designed these removable covers to be used with other duodenoscopes too, albeit models sold overseas and not used in the U.S., such as the Olympus TJF-160VR.

Olympus defines these detachable covers in some instructions to be, not reusable per se, but “semi-disposable,” clarifying that the cover can be reused, but “only if it is undamaged and can still be attached securely to the endoscope.”

A different duodenoscope: the ED34-i10T2

Last Tuesday, a day before the FDA cleared the ED34-i10T, Pentax Medical Europe issued a press release disclosing that it had developed a different, unique duodenoscope with a detachable “single-use, sterile, distal end cap.” This model is distinctly named the ED34-i10T2.

Images and the specifications of this duodenoscope — which Pentax also calls the DEC™ Duodenoscope — are pictured on Pentax’s website. (This article herein may refer to this model as the “T2” and to the U.S. cleared model simply as the “T.”)

From images reviewed for this article, the design of this DEC™ model appears also to feature a disposable forceps mechanism (although this warrants clarification). The ED34-i10T’s forceps mechanism appears to be reusable (this, too, warrants confirmation).

The release adds that the DEC™’s sterile distal end cap “responds to the need for single-use products in endoscopy as a result of increasing incidences of carbapenem-resistant Enterobacteriaceae (CRE) infections that may be linked to improper cleaning or disinfection of the elevator mechanisms of duodenoscopes.”

Features that the Pentax’s ED34-i10T (“T”) model cleared last week share, in common, with the company’s ED34-i10T2 (“T2”) model, like which features are different, are not all visually obvious. Due to different international standards, models of medical devices sold in the U.S. may be different in design and labeling from those sold in other countries, such as Europe or Canada.

A Pentax webpage, which appears to feature this just-cleared ED34-i10T model, does not use the words “sterile,” “single use,” “disposable” or “semi-disposable” — or “reusable” — to describe the design of this model’s distal cap.

In fact, an associated instructional webpage by Pentax discussing manual cleaning of the endoscope advises: “Remove all of the valves, the distal end cap (if present) and any further detachable components and submerge them in the detergent solution,” followed by the instructions to disinfect and store this cap (if the endoscope features the cap).

This advice suggests the distal cap of the just-cleared ED34-i10T model might be reusable, defined as a component that can be used on more than one patient, following its cleaning and either disinfection or sterilization after each use.

Moreover, this article could not identify whether the FDA has previously used the term “semi-disposable” to describe a component of a device, or an accessory, sold in the U.S.

The FDA defines “both terms ‘single-use device’ and ‘disposable’ to refer to a device that is used on a single patient during a single procedure and then discarded.”

Perhaps, the term “semi-disposable,” as Olympus has used it to describe the MAJ-311 and MAJ-411 distal covers, is not recognized by the FDA and refers to the use of these detachable covers only overseas. This warrants clarification.

“It would seem Pentax was prodded by the FDA to come up with another solution, and this disposable cap design might be the company’s response.” — Dr. Muscarella also told KHN

Indeed, it is unclear whether other GI endoscope models also cited in the literature for being particularly difficult to clean — such as (linear) echo-endoscopes, which also feature a complex forceps mechanism — might also be re-designed in the future with the same detachable cap.

Echo-endoscopes may be used during “EUS” (or, endoscopic ultrasound) “to image both intramural structures and structures adjacent to the GI tract,” according to the American Society for Gastrointestinal Endoscopy.

Also yet to be learned is the impact, if any, that a disposable endoscope design might have on calls — such as those voiced at a meeting two weeks ago, in Virginia, in which the FDA and CDC participated — to require the sterilization of flexible endoscopes.

These and other questions are listed in the Box appended to the end of this article.

Another of Pentax’s duodenoscope models — the ED-3490TK — which does not feature a disposable distal cover, has been closely watched by health officials after being linked in 2013 and 2014 to ‘superbug’ outbreaks at two hospitals in Park Ridge (IL) and Boston (MA), respectfully. 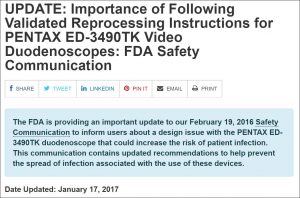 As KHN reported last Friday, the FDA issued a safety communication to U.S. hospitals, on January 17, 2017, discussing what the Agency called a “design issue” with this model that, according to the FDA, “could increase the risk of patient infection.”

During the past year Pentax had provided the FDA with “additional information related to a potential risk associated with the design and manufacturing of the ED-3490TK duodenoscope,” according to the FDA’s January alert.

Discussing this device further, this federal alert added that “cracks and gaps in the adhesive that seals the device’s distal cap to its distal tip can occur, which can lead to microbial and fluid ingress. These areas can be challenging to clean and high-level disinfect and may increase the risk of infection transmission among patients.”

This FDA notice did not advise U.S. hospitals necessarily to stop using the device, however.

Instead, the FDA recommended that hospitals “immediately remove from service for assessment, and repair or replace any duodenoscope that shows visible signs of damage.”  The FDA wrote that “examples of (such) damage may include (among other cited issues) cracks and gaps in the adhesive that seals the device’s distal cap or other signs of wear or damage.”

According to the FDA’s January alert, Pentax had distributed a “Customer Notification Letter,” also on January 17, 2017, that explains this “design issue,” as well as outlining the company’s corrective actions and “strategy to closely inspect the distal cap area of all customers’ ED-3490TK duodenoscopes.”

Regulatory reports filed by the company since January reveal that a significant number of inspected ED-3490TK duodenoscopes “failed the inspection criteria” the company had developed and predefined to assess the device’s safety.

Six months later, on July 11th, Pentax recalled the ED-3490TK, along with a second duodenoscope model, the ED-3270K. This recall notice refers to the company’s January 17th notification letter.

A manufacturer’s “recall” of a device, to be clear, can describe a number of different types of regulatory actions or corrections and does not necessarily require that the manufacturer remove the device from use.

In Pentax’s July 11th recall notice, the company states that the reason for issuing its January 17th letter (six months earlier) was “to determine how soiling may have occurred on the surface of the suction cylinder and under the distal cap during testing.”

This recall instructed customers “to immediately remove any affected product from use.”

For its part, Pentax’s recall adds that it “will replace any affected product with its current generation model.”

In addition to the Pentax ED-3490TK (and ED-3270K) model, duodenoscopes sold in the U.S. by Olympus and FujiFilm (Wayne, NJ) have also attracted the attention of health officials after being linked to multidrug-resistant infections — and also have been recalled.

On January 15, 2016, the FDA issued a press release announcing that Olympus was voluntarily recalling the original TJF-Q180V duodenoscope, replacing it with a new design cleared on the same day.  This new device is also called the TJF-Q180V. On this same day Olympus isused a customer letter discussing this recall.

The new Olympus model features a number of design modifications, including a new sealing mechanism at the tip of the duodenoscope to reduce the risk of fluid leakage into the elevator channel, according to the FDA’s press release.

Discussions in Infection Control discusses this newly cleared model in its related article, “The Redesigned Olympus Duodenoscope Has Been Linked to a ‘Superbug’ Cluster.”

At the time of this clearance, in January 2016, Olympus estimated that it would require approximately seven months, until August (2016), to “correct the mechanism in the approximately 4,400 TJF-Q180V models currently used in health care facilities throughout the country,” the FDA wrote in this same press release.

Seemingly applying to FujiFilm the same regulatory paradigm it used with Olympus the previous year, the FDA cleared a newly designed ED-530XT duodenoscope on the same day, July 21, 2017.

The ED-530XT’s new design and labeling were initiated out of “an abundance of caution to help reduce the potential risk to health that may be associated with inadequate reprocessing of the device,” according to FujiFilm.

Pentax recalls other endoscopes, too

The recall of these eleven endoscope models in June appears to be a result of a quality issue the company identified several years ago, in 2010 and 2011 — namely, loose suction arms.

According to each of these three devices’ recall notices, the regulatory action serves “to retrospectively document the actions that were taken by Pentax to correct the loose suction arms on eleven (11) models of endoscopes and to notify FDA of these actions taken in 2010-2011.”

In November 2001, Olympus recalled 15 bronchoscope models because of the potential for their biopsy channel port housing to become loose and retain bacteria and other microorganisms, posing an infection risk to patients.

Discussing this recall, the New England Journal of Medicine published a report, in 2003, that concluded a large outbreak of the bacteria Pseudomonas aeruginosa related to bronchoscopy “was apparently caused by a loose biopsy-port cap in the bronchoscopes.”

This NEJM report emphasized that, “Instrument safety and surveillance methods for bronchoscopy must be improved, and better recall procedures are needed for medical devices.”

Box: Questions about this FDA clearance and disposable cap.

A Bronchoscope is Linked Again in the U.S. to an Outbreak of the Feared ‘CRE’ Superbug